Scarborough Group International (SGI) has announced that it has started the next significant stage of development at its flagship project, Thorpe Park Leeds.

By 2017 Scarborough plans to deliver several key phases at Thorpe Park Leeds, including a new 250,000 sq. ft. retail and leisure complex, up to 60,000 sq. ft. of high quality office accommodation, the first phase of 300 new homes, and a 113 acre public park with sports facilities.

The announcement follows the recent planning decision for the first 60,000 sq. ft. of offices, at least half of which Scarborough intends to develop speculatively later this year ready for occupation by summer 2016. In January this year Leeds City Council also approved plans for 300 new homes on the site.

To mark the occasion, Scarborough’s founder Kevin McCabe met on site with Councillor Richard Lewis, Executive Member for Regeneration, Transport and Planning at Leeds City Council, to talk through progress to date and the opportunities offered by this major strategic regeneration project. Significantly, the development now under way includes the first phase of the critical East Leeds Orbital Road that will connect the M1 to north-east Leeds in readiness for the future delivery of up to 7,000 new homes in the East Leeds Extension – the City’s largest single growth area.

Kevin McCabe said, “We are delighted to bring forward the next phase of development at Thorpe Park Leeds which will distinguish it as one of the UK’s most forward thinking and sustainable mixed-use business parks. It represents a new era in strategic commercial development where all the benefits of a business park meet with unrivalled on-site amenities and transport connections. We are committed to creating a market-leading scheme that adds to the Leeds City Region economy and will continue to flourish for many years to come.

Leeds based GMI Construction, which is the Strategic Construction Partner to the scheme, is well underway with ground preparation works and in the process of extracting 200,000 tonnes of coal from the site. 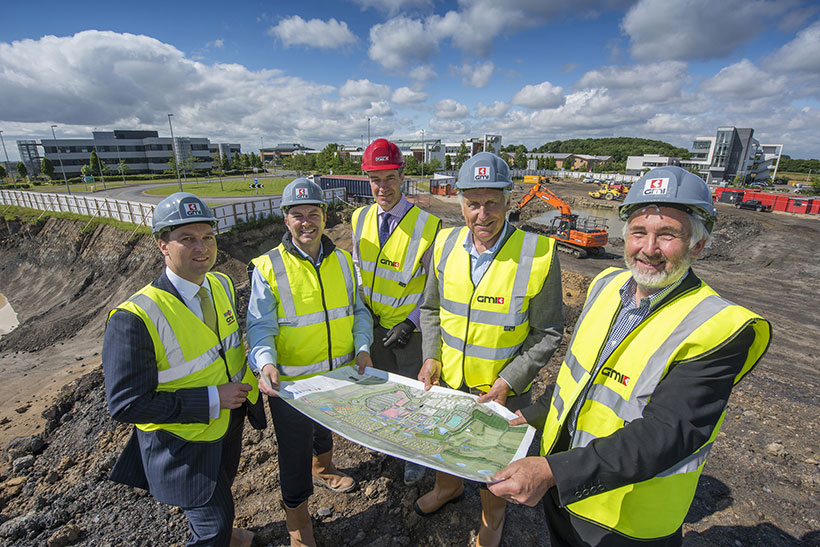 “We are delighted that the next phase of development at Thorpe Park is underway, as the project will bring massive benefits to the local community and the city economy bringing new houses, jobs, office and retail facilities, a public park and improved transport links through the East Leeds Orbital Road. Transformational projects like this perfectly reflect the strength and ambition Leeds has and also the confidence investors have in us as a city, so we look forward to seeing the benefits of Thorpe Park being realised in the months and years to come.”

The scheme also features nearly 140 acres of parkland and green space, which will run throughout the site, and includes Green Park, the new 113-acre public park to the west of the site, which is being brought forward by SGI in conjunction with Leeds City Council.

The East Leeds Orbital Road is a key piece of road infrastructure which links the north east Leeds area and the ‘East Leeds Extension’ housing allocation, to the M1. The road crosses Thorpe Park Leeds, with SGI delivering its first section to Manston Lane. This will have a transformational effect upon the accessibility and traffic management in the area and will enable the development of up to 7,000 houses.

Thorpe Park Leeds is expected to create over 13,000 jobs, including nearly 4000 local employment opportunities for the Leeds city region.

Thorpe Park Leeds is already an important business location for both Leeds and the North of England, located just six miles east of Leeds City Centre, with its own dedicated access off junction 46 of the M1. Among the 60 occupiers of the existing office space are IBM, National Grid, GE Capital, Vinci, BAM and United Utilities.